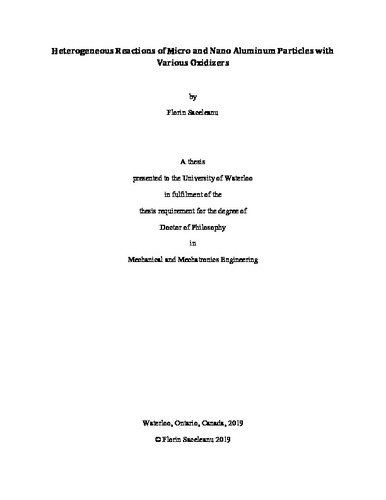 Micro and nano aluminum (Al) particles have drawn much attention for properties as metal fuels in energetic materials. Aluminum is the preferred metal due to its thermodynamic stability after long term storage, abundance on Earth and relatively high reactivity with various oxidizers such as oxygen gas, metal oxides and liquid water. This thesis investigates the kinetics of heterogeneous reactions of micro and nano aluminum particles via controlled oxidation and combustion experiments. The main objectives of this research are to incorporate fundamental theories in solid state kinetics with the experimental data/observations, and obtain a deeper understanding of the kinetic mechanisms that control these heterogeneous reactions. Proper experimental setups and procedures are an essential part of this research due to the currently limited theoretical knowledge in this field. Studies have shown that mass diffusion and phase transformations processes are elementary for reactions of Al in air or oxygen. However, the physical processes regarding simultaneous oxidation and phase transformation were unclear. Thermogravimetric and differential scanning calorimetry experiments and the core-shell model of oxidation were combined, and it was found that this model is only applicable when the shell does not undergo phase transformations. On the other hand, the simultaneous oxidation and phase transformation were explained by the nucleation and growth model with a parameter that defines the rate controlling processes. Diffusional processes were rate determining steps in the oxidation of micro and nano Al powders while the kinetics of the chemical reactions were very fast. Similarly, high speed imaging of the combustion of consolidated Al particles via laser ignition in a closed chamber at various partial pressures of oxygen indicated that oxygen diffusion is the rate controlling mechanism of flame propagation. However, some experimental observations diverge from the theoretical predictions due to the particle agglomeration and inhomogeneous pore structure. Aluminum based thermites are a class of highly energetic materials composed of solid state Al and metal oxidizer with tunable combustion properties. The ignition and combustion mechanisms of consolidated aluminum/copper oxide (CuO) nanothermite pellets were investigated via laser ignition coupled with high speed imaging. It was found that the fast heating created significant material ablation followed by heat transfer along the heated surface. The bulk ignition occurred near the edges prior to the self-sustained combustion. The high porosity Al/CuO pellets ignited significantly faster and the burning speed was orders of magnitude higher compared to the low porosity pellets. The results indicated that the reaction mechanism changed from mass convection to heat conduction with increasing the bulk density. Scanning electron microscopy images of pre and post-combustion illustrated that homogeneity of the mixture is a critical parameter for optimizing the performance. On the other hand, the type of nanothermite structures is a critical parameter for the tenability of these reactions. It was found that the ignition mechanisms of the consolidated Al/CuO nanoparticles and sputtered Al/Cu2O nanolaminates are fundamentally different. The net energy balance on the laser heated surface controlled the ignition delay in the pellets, and this was dominated by the net thermal conductivity of the porous structure. A semi-empirical laser ignition model of the pellets was proposed. On the other hand, significant laser energy absorption was mandatory for the ignition of nanolaminates. The ignition delay was optimized by finding the optimum Cu2O layer thickness that maximized both the absorption coefficient of laser radiation and the mass diffusion rates of oxygen. The reactions between aluminum and liquid water are attractive to generated hydrogen gas on-demand. Controlled oxidation experiments were performed using isothermal calorimetry and self-sustained combustion experiments were performed using a high pressure batch reactor. . It was found that the nucleation and growth of the aluminum hydroxides byproducts control the kinetics of these reactions and thus the kinetics of hydrogen release. Model and model-free methods were implemented to describe the reaction sequence. It was found that this mechanism exhibits two distinct and sequential stages: a kinetically controlled stage where nucleation and growth is limited by the chemical reactions on the surface of aluminum, and a diffusion controlled stage where the growth is limited by the mass diffusion through the aluminum hydroxide by-products. The separation of these stages is not obvious under non-isothermal conditions due to the overlap of the stages, and the one with a lower Ea dominates. The kinetics of the reactions was significantly increased under high temperature and pressure, which prevented the boiling of water. The Al-hydroxide byproducts and NaOH solutions were found to have catalytic properties on the Al/water reactions by lowering the apparent activation energy. A semi-empirical batch reactor model was proposed to study the complexity of these heterogeneous reactions.