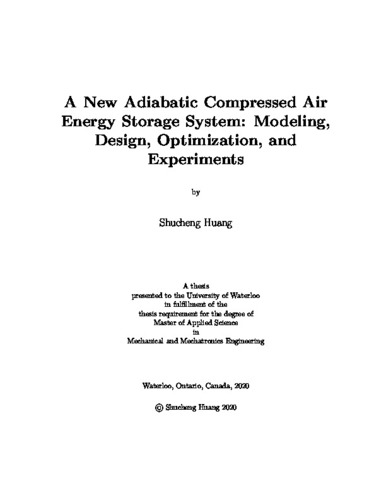 Wind farms and solar farms often face challenges in delivering consistent power output during peak demand due to the inconsistency of wind and solar resources. An adiabatic compressed air energy storage (ACAES) system based on the novel compression strategy is proposed to store and release energy when needed to reduce CO2 emission. Compared to existing ACAES system designs, the main potential advantages of the proposed system are the reduced cost, space, and simplicity. A prototype, originally developed for the air hybrid engine project at the University of Waterloo, was adopted for this project. Mathematical models were developed for the system under air compression (AC) and air motor (AM) mode. Simulations ran in GT-Suite yielded consistent results with mathematical models'. The previous prototype was thoroughly tested and evaluated. Design issues were addressed, and changes were incorporated into the new prototype design. The new experimental system models were developed in GT-Suite and evaluated through experimental analysis. The ACAES system with a separate thermal energy storage (TES) was detailed. Specifically, a low-temperature ACAES was selected for practical reasons, and water was chosen as the heat transfer medium (HTM). Simulation results confirmed the TES system's ability to maintain high pressure (HP) tank temperature of 150 deg C. A mean value model was developed to predict engine brake power, and a throttle controller was used to regulate the engine brake power during the air expansion process. Considering operational safety constraints and feasibility, system components were analyzed and optimized to improve the ACAES system roundtrip efficiency. Additionally, the genetic algorithm (GA) was used to optimize the valve timing, and simulation results showed that the optimized valve timing could improve the engine brake power by 13.38%. A comparison study was presented to analyze the roundtrip efficiency of the optimized ACAES system over the baseline system. It was observed that the AC/AM mode efficiency was improved by 108% and 70.3%, respectively.