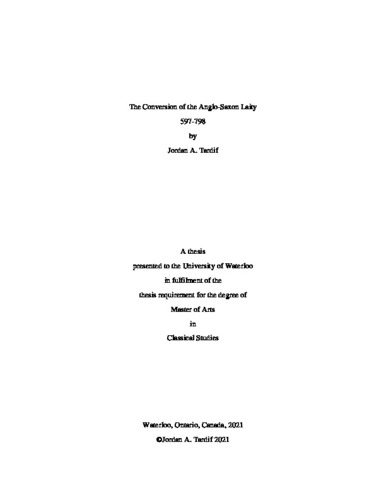 Conversion in the middle ages was driven by many factors depending on the time and place the conversion was occurring. This is often wrongly summarized by explaining that once a king converted his subjects would follow suit. This paper explores how the conversion process took place throughout Anglo-Saxon England and shows that while a king’s conversion certainly aided the process of converting the kingdom, it was not the sole deciding factor. In order to accomplish this, the study analyzes both the traditional sources, Bede’s Historia Ecclesiastica and the Anglo-Saxon Chronicle, which focus on the royalty and kings. In addition to these traditional sources, this study also uses material such as hagiographies, poetry, arts, and human remains in order to gain a broader perspective on the conversion effort than that conveyed in the traditional written sources. By analyzing these additional sources, this paper shows that the conversion process was highly complex as it sought to adapt and adjust Christian practices and teachings to make sense within the Anglo-Saxon cultural framework.