Celtic, Roman, and Everything in Between: The Evolution of the Sacred in Romano-Celtic Wales 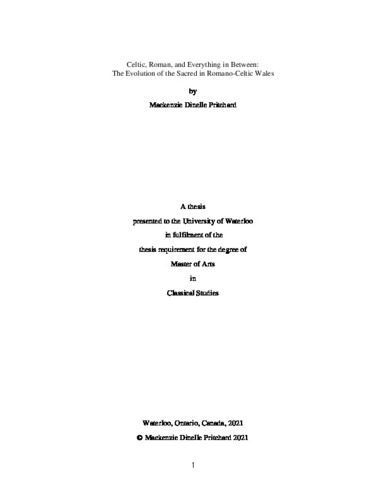 Celtic religion is usually summarized with a quick discussion of druidic practices and human sacrifice. The actual ancient religion of the Insular Celtic populations was a lot more complicated. This thesis introduces the ancient Celtic religion practiced in Wales and discusses how the cultures of the Celtic and the Roman peoples interacted during their co-occupation of the British Isles, with emphasis on the evolution of the beliefs and practices which were considered sacred to those inhabiting the land. The syncretism of Celtic and Roman religious activity (beginning in 43 BCE until the arrival of Christianity around 200 CE) is difficult to separate in some instances because of the substantial similarities in the practices and beliefs. Hybridity of the sacred in ancient Wales can be seen in the historical written records of the Roman peoples, the archaeological evidence remaining in Britain, and in the socio-cultural outcomes which can be seen in the written medieval Welsh chwedlau (tales). While the Roman authors generally speak on the druids, the philosophical beliefs, and sacred practices of the Celtic peoples, the archaeological finds and epigraphic evidence provide more insight into the deities worshipped in Britain by both Roman and Celtic individuals, as well as some cultic customs. Later works, written by Welsh scribes, reveal (traditionally oral) mythologies and their portrayal on topics such as Celtic deities, the Otherworld and its inhabitants, and various Celtic festivals. The findings of this thesis have concluded that the practices of the Roman people did not displace those of the Celts completely but that the cultural and sacred practices of the Celts were integrated into the traditions of the Romans.

Mackenzie Dinelle Pritchard (2021). Celtic, Roman, and Everything in Between: The Evolution of the Sacred in Romano-Celtic Wales. UWSpace. http://hdl.handle.net/10012/17273