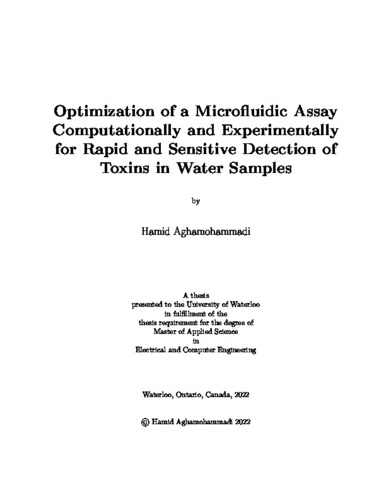 Toxins are biological molecules observed in water resources, harmful to animal and human life. They are produced by certain algae and can find their way to the human body by drinking contaminated water, recreational water activities, or consuming contaminated crops or fish. Identification of these toxins in water resources becomes an essential part of the food industry and water quality analysis, creating an immediate need for an easy, portable, and rapid detection. Developing biosensors using immunological principles removes the need for complex and tedious analytical analysis while enabling sensitive and specific detection of biological molecules, such as toxins. The advent of microfluidic devices further simplifies the analysis and allows for rapid, automated, and in-field detection. The combination of biosensors with microfluidic devices preserves the advantages but overcomes the limitation of standard analysis methods. The aim of this thesis is to first closely investigate the flow of the solution inside the microfluidic channel to develop a new computational model. Design and fabrication of microfluidic devices and implementation of immunoassay is a time-consuming process, and optimization of every aspect of the experiment is not feasible. A valid computational model can expedite the design and optimization process. In the next step, we showcased the use of the optimized microfluidic design for quick, in-field monitoring of cyanotoxins in water resources. We present a novel bead-based competitive fluorescent assay using Quantum Dots (QDs) as a reporter agent for multiplexed detection of two types of toxins: Okadaic Acid (OA), a marine toxin, and Microcystin-LR (MC-LR), a freshwater toxin. To ease and automate the detection process, a reusable microfluidic device, Toxin-Chip, was designed and validated. It consists of (1) micromixer to mix and incubate the target toxin with the detection reagent, (2) detection chamber to magnetically retain beads for downstream analysis. The emitted signal from QDs captured on beads is proportional to the amount of toxin in the solution. An image recognition program was developed to carry out the signal read-out of microscopic images of the detection chamber. Two toxins were analyzed on the microfluidic chip, and the device exhibited a low limit of detection (LOD). The bead-based platform also showed remarkable chemical specificity against potential interfering toxins. The device’s performance was tested and validated using natural lake water samples from Columbia Lake of Waterloo contaminated with cyanotoxins. The Toxin-Chip holds promise as a versatile and simple quantification tool for multiplexed field-based cyanotoxin detection, with the potential of extension for the simultaneous detection of more targets.

Hamid Aghamohammadi (2022). Optimization of a Microfluidic Assay Computationally and Experimentally for Rapid and Sensitive Detection of Toxins in Water Samples. UWSpace. http://hdl.handle.net/10012/18774