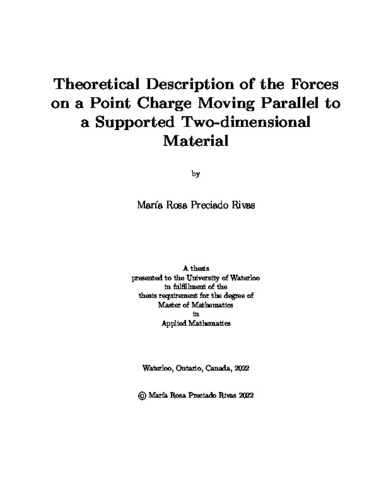 A charged particle, moving at a certain distance and parallel to a target, experiences a stopping force that slows it down and an image force that deflects it towards the target's surface. In this work, we aimed to describe the forces acting on a point charge when the target is a system composed of a two-dimensional (2D) material and a semi-infinite substrate. To do so, we used an analytical model of the conductivity of the 2D material, which combines contributions coming from intra- and interband electronic transitions, paired with a simple dielectric function for the substrate in the terahertz and mid-infrared range of frequencies. We obtained an expression for the image force in terms of the energy loss function of the system using a Kramers-Kronig relation for the case of an isotropic material, illustrated using doped graphene supported with silicon carbide. This result implies that the image and stopping forces can be analyzed on an equal footing in the frequency-momentum domain. Additionally, we separated the forces into components that stem from individual plasmon-phonon hybrid modes. On the other hand, a transverse stopping force arose in the case of an anisotropic material. We found that this force, parallel to the target's surface and perpendicular to the particle's trajectory, has a magnitude comparable to the longitudinal stopping force, meaning that it should be measurable experimentally. Using doped phosphorene supported with silicon dioxide, we obtained that all forces showed speed-dependent anisotropy when the direction of motion is varied with respect to the principal axes of the 2D material's conductivity. Finally, we found that the image force became repulsive when the incident charge moves along the armchair direction of free-standing phosphorene. This implausible result stemmed from an insufficiency in the model used but is eliminated in the presence of the substrate.