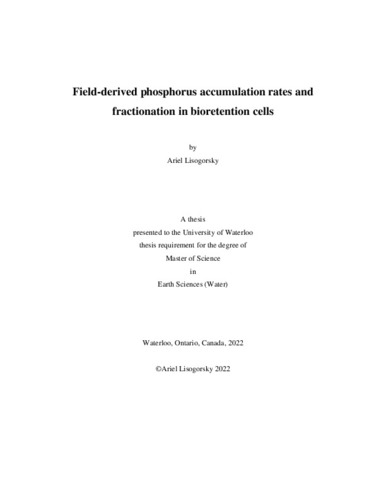 Bioretention cells are commonly used green infrastructure in urban stormwater management systems. They show promising performance in managing stormwater and mitigating a multitude of pollutants. In urban catchments, they have been shown to favorably reduce the ‘flashiness’ and overall volume of surface flow resulting from storm events by promotion of storage, groundwater infiltration, and evapotranspiration. Previous studies have shown highly variable phosphorus (P) removal impacts for bioretention cells, establishing a need for more comprehensive understanding of P biogeochemistry within bioretention systems to identify the processes that are responsible. In this study, a sequential extraction (SEDEX) method was used to analyze concentrations of six P fractions in filtration media samples collected from a set of 12-year-old interconnected bioretention cells in Mississauga, Ontario, Canada. The newly acquired data, when combined with previously available data for the site, showed an average total P (TP) accumulation rate of 66-78 mgP kg⁻¹ y⁻¹ in the top 10 cm of media and 4-32 mgP kg⁻¹ y⁻¹ in the 25cm – 45cm deep region. Analysis of the measured concentrations using non-metric dimensional scaling (NMDS) identified that variable clusters associated with redox-sensitive P and organic matter-associated P (organic, humic-bound P, and exchangeable) fractions best represented TP variation in the system. In contrast, little of the overall TP variation in the media was explained by the Ca or calcium-associated P concentrations. Evidence of continued P accumulation with a preferential near-surface enrichment in the system suggests that bioretention cells have potential for long-term P capture, especially if coupled with targeted media replacement of the surface media. Additionally, the difference between calcium and redox sensitive fractions suggests that further consideration of the redox sensitivity of aged cells should be considered in their design. Finally, this difference highlights the need to employ methodologies that distinguish redox- and calcium- associated fractions when attempting to speculate about the mechanisms responsible for the P distributions observed within bioretention systems.