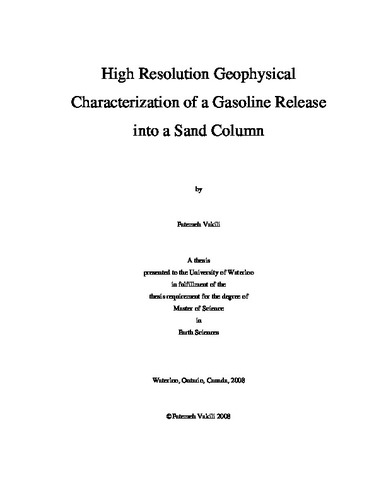 A controlled column experiment was conducted to investigate the geophysical response of gasoline spills into the partially saturated sand column. The column was 0.61 diameter (ID) and 2 m high cylindrical polyvinyl chloride, which was packed with the Borden sand to a height of 1.95 m, flushed with CO2, saturated, and drained to a height of 0.73 m. The monitoring techniques used for this experiment was DC resistivity and time domain reflectometry (TDR) methods. The column was equipped with resistivity electrodes and TDR probes, which were placed on the column wall vertically with 3 cm intervals, on opposite sides, two monitoring wells, an injection well, a manometer, an outlet/inlet system, and a vent. A total amount of 5 liters of standard API 91-01 gasoline was added to the system in steps of 1, 2, and 2 liters to examine the geophysical response to different amounts of gasoline. Measurements were taken before and after each injection and also during subsequent fluctuation of the water table. Both monitoring techniques were able to record even the minor changes in the trend of conductivity and permittivity profiles due to the addition of the small amount of gasoline during the first spill. The conductivity and permittivity profiles obtained before lowering the water level below the original level and those obtained after the water level reached to the original level do not match, which is an indication of entrapped gasoline inside the pores. Two core samples was taken from the sand symmetrically after each water table fluctuation and analyzed for total petroleum hydrocarbon (TPH) analysis and the results were compared to the conductivity and permittivity results. The conductivity profile obtained using DC resistivity method was compared to that of obtained using TDR method. The profiles match in the saturated zone where all of the pores are connected with water and therefore electrolytic conduction is predominant. In the unsaturated zone, where there is low pore water connectivity, TDR measured conductivity values are higher than those measured using the resistivity method. Water saturation values were calculated using conductivity and permittivity values before and after each injection. Different values of saturation exponent (n) were tested for Archie’s law until an appropriate value was found which gave the best water saturation from conductivity data for clean Borden sand. Then, the water saturation obtained from permittivity values using Topp’s equations for different materials were compared to that of obtained from conductivity values using Archie’s equation. Topp’s equation for 30 µm glass beads provided the best match. Furthermore, other equations developed by other researchers were examined to obtain water saturation profiles from the permittivity values; all of them overestimate the water saturation for Borden sand. The water saturation profiles after the gasoline spills obtained using both Archie’s law and Topp’s equation do not match, perhaps because both equations were developed for three-phase (water-solid-air) systems.