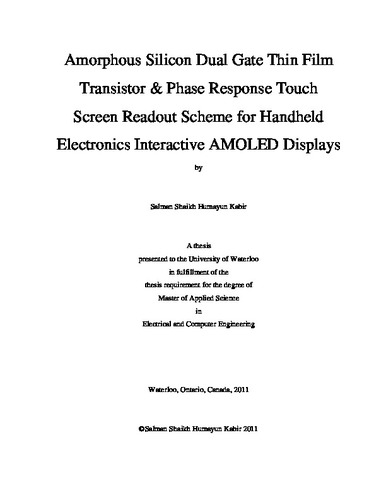 Interactive handheld electronic displays use hydrogenated amorphous silicon (a-Si:H) thin film transistor (TFT) as a backplane and a Touch Screen Panel (TSP) on top as an input device. The low mobility and instability of a-Si:H TFT threshold voltage are major two issues for driving constant current as required for Active Matrix Organic Light Emitting Ddiode (AMOLED) displays. Low mobility is compensated by increasing transistor width or resorting to more expensive material TFTs. On the other hand, the ever increasing threshold voltage shift degrades the drain current under electrical operation causing OLED display to dim. Mutual capacitive TSP, the current cell phone standard, requires two layers of metals and a dielectric to be put in front of the display, further dimming the device and adding to visual noise due to sun reflection, not to mention increased integration cost and decreased yield. This thesis focuses on the aforementioned technological hurdles of a handheld electronic display by proposing a dual-gate TFT used as an OLED current driving TFT and a novel phase response readout scheme that can be applied to a one metal track TSP. Our dual-gate TFT has shown on average 20% increase in drive current over a single gate TFT fabricated in the same batch, attributed to the aid of a top channel to the convention bottom channel TFT. Furthermore the dual gate TFT shows three times the Poole-Frenkel current than the single gate TFT attributed to the increase in gate to drain overlap. The dual-gate TFT shows a 50% improvement in threshold voltage shift over a single gate TFT at room temperature, but only ~8% improvement under 75ºC. This is an important observation as it shows an accelerated threshold voltage shift in the dual-gate. This difference in the rate of threshold voltage change under varying temperature is attributed to the difference in interface states, supporting Libsch and Kanicki’s multi-level temperature dependant dielectric trapping model. The phase response TSP readout scheme requires IC only on one side of the display. Cadence Spectre simulation results showed that both touch occurrence and touch position can be obtained using only one metal layer.