Limiting techniques for the discontinuous Galerkin method on unstructured meshes 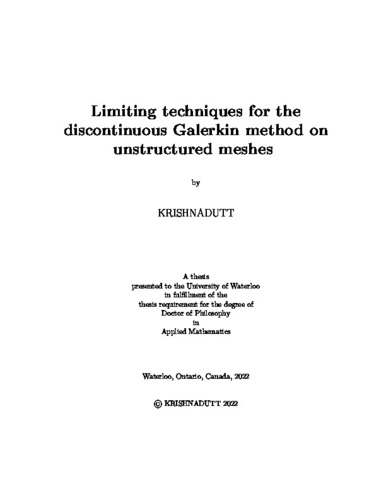 Many complex phenomena like shock-shock interactions, shock-vortex interactions, stratified flows, etc., are governed by nonlinear hyperbolic conservation laws. Higher order numerical schemes like the discontinuous Galerkin (DG) method are increasingly being used in computational fluid dynamics (CFD) codes to solve such conservation laws. Oscillations often develop in the numerical solutions obtained using higher-order methods. These spurious oscillations can lead to numerical instabilities and eventual degradation of the solution. Slope limiting is one of the mechanisms used to suppress such oscillations, and thus, stabilize the numerical solution. Slope limiters were originally introduced for finite volume (FV) methods, where the reconstructed slope in an element is modified to prevent oscillations while maintaining second-order accuracy and stability of the numerical solution. Limiters tailored specifically for the DG method have also been proposed. However, developing efficient higher order limiting techniques for the DG method on unstructured meshes remains an open problem. Many factors influence the design of a suitable limiter for the DG method, e.g., the domain discretization involved, the basis functions used to approximate the solution, the choice of limiting directions, and the neighborhood used to reconstruct the solution coefficients, to name a few. In this work, we propose high-order moment limiters for the DG method on unstructured two-dimensional (triangular, quadrilateral, curvilinear triangular) and three-dimensional (tetrahedral) meshes. The limiters work by relating the solution coefficients (moments) to directional derivatives along specified directions and limiting said directional derivatives independently using a one-dimensional slope limiter. The limiting is performed hierarchically starting at the highest moment and stops on reaching a set of moments/derivatives that remains unchanged, thereby preventing overlimiting. To use available computational resources efficiently, simulations often employ run-time adaptive mesh refinement strategies. In this thesis, we present a high-order limiter for the DG method on nonconforming triangular meshes that arise in such adaptive computations. Moreover, we also propose a simple algorithm to update the reconstruction stencil of elements in an adaptively refined triangular mesh. Our algorithm is implemented entirely on the graphics processing unit (GPU) and avoids race conditions. We provide numerical examples to show that limited solutions retain the theoretical rate of convergence and are robust in the presence of discontinuities. Finally, we perform wall clock studies to analyze the performance of the proposed limiter for the computational cost involved in executing the limiter.